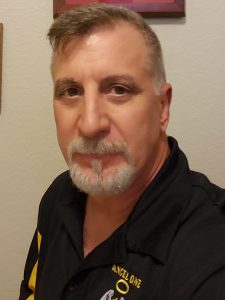 Tom served 5 years (2013-2017) as a part-time police officer for the Village of Lakemoor, Illinois, assigned as the training officer. During this time he was responsible to develop, conduct and record all in-house training as well as assist in writing department policy.

Tom served 24 years (1986-2010) with the Lake County (IL) Sheriff’s Office – Tom retired in 2010. During his last 5 years, Tom was assigned to the Training Division as the full time Senior Firearms and Tactics Instructor and part-time Tactical Response Team – Field Commander. During his career, Tom attended over 3516 hours of formal training classes. Tom served in the Court Security, Highway Patrol, Criminal Investigations and Training Divisions. Tom has a strong tactical and training background.

Tom has trained in the martial arts since 1977 and holds a Second Degree Black Belt in Tae Kwon-Do as well as extensive experience in Filipino Martial Arts and Muay Thai Kickboxing. Tom served in the United States Marine Corps Reserve as an infantry Sergeant and is a Gulf War Veteran.