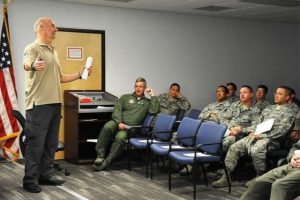 I began shooting when I was about 6 years old.  I went to an amusement park and was intrigued by the shooting gallery.  Although I couldn’t even se over the counter, my Dad picked me up and while kneeling on the counter, with him holding the Rossi pump in .22 short, I laid my hands over his and tried to sight. I pulled the trigger as he pumped and although I didn’t hit anything I looked up to him and told him I wanted to learn how to shoot the right way.

The first pistol I shot was my Dad’s US Army 1911A1 and the first revolver was my Uncle’s .38 S&W Victory model, both from WW II.

I am honored to have had a 38-year career in the Air Force with 27 years split between Special Operations and Combat Search and Rescue and to have served in Viet Nam, Desert Storm, Enduring Freedom and the Global War on Terrorism as well as a number of other great vacation destinations.

After I retired, I taught and worked at the Marksman Pistol Institute in Tucson until I had to have some required surgeries due to all the fun I had when younger.  During my recovery, I decided to start Green Feet Firearms Training LLC and work for myself.  Since I love both shooting and teaching, this was a perfect marriage.